Big Turn-Off: Which subscription apps will people put pay to in 2022?

The end of lockdowns and rising cost of living could explain why growing numbers of people are looking to drop some of the best-known fitness, dating and TV streaming apps.

Our research reveals that Strava, Tinder and Netflix are among the services whose popularity seems to be waning as lifestyles, habits and priorities change.

With more subscription-based apps now available, and consumers becoming increasingly cost-conscious, the big players are under pressure to engage users with fresh content and features – and give them a reason to pay for the service (or choose the premium tier).

In a competitive market, every service is vulnerable to the whims of consumers. Netflix, for instance, saw the number of subscribers plummet by almost a million between April and July this year, amid growing competition from other streaming providers.

To find out which apps are most in danger of being dropped, we compared search engine data – including terms such as ‘how do I cancel my [name] subscription app?’ – from the first six months of 2021 and the same period in 2022.

The table below shows the 10 that have seen the biggest jump in searches from people thinking about cancelling:

In the case of VPN and storage apps, the decline in interest is most likely down to people no longer needing them now that they've returned to their offices after long periods of working from home.

Changing lifestyles could be why some are keen to unsubscribe from Strava, Tinder, Hinge and Netflix. It’s possible that months of solo runs, endless box-sets and swiping left meant they couldn’t wait to get back to the gym – and meeting people in real life – again. 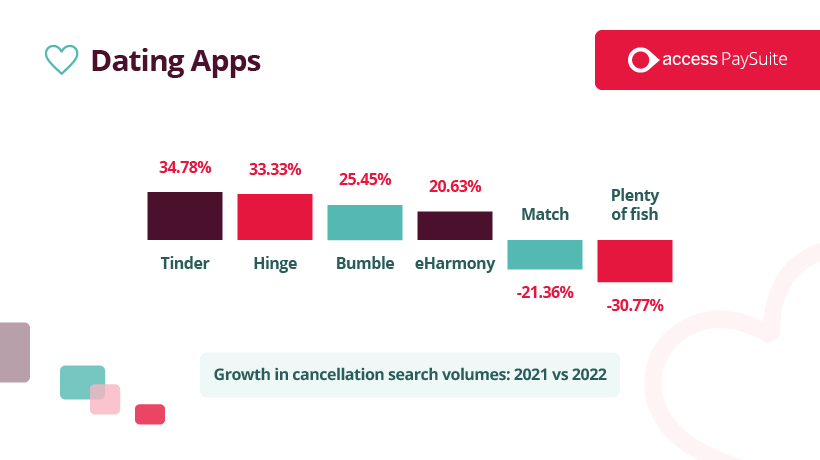 Saving money may also be a factor for some as the cost of living begins to bite. Slimming down premium subscriptions, especially ones they don’t use regularly, is an obvious way to save money. While Strava, Tinder, Hinge already offer free versions, it’ll be interesting to see if Netflix can claw back market share by introducing a free tier with advertising. Co-CEO Ted Sarandos certainly believes there is a ‘big customer segment’ who find Netflix too expensive and are happy with advertising. 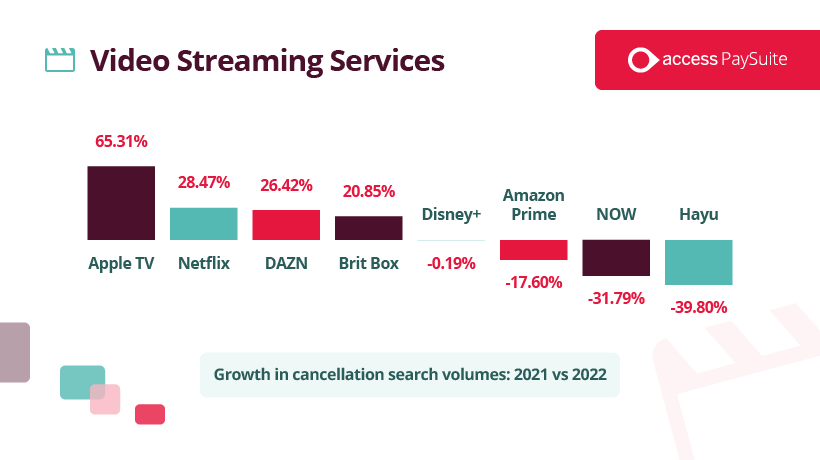 Of course, as mentioned above, there are so many apps on the market that people can simply switch between them depending on which ones have the best content or offers.

Other notable apps on the list were Audible, Amazon Prime and Spotify, where interest in cancellation fell by 12.19%, 17.6% and 23.46% respectively. The table below shows which ones have seen the biggest turnaround in interest:

The data suggests that health and fitness continue to be a priority for many – and the appearance of Calm and Headspace, along with Fiit and Noom, is a sign that people are investing in their mental as well as physical wellbeing. And they’re not giving up on finding love either. While Tinder and Hinge saw their popularity drop, two of the older online dating apps, Plenty of Fish and Match, saw searches for cancellations fall by 30.77% and 21.36%. 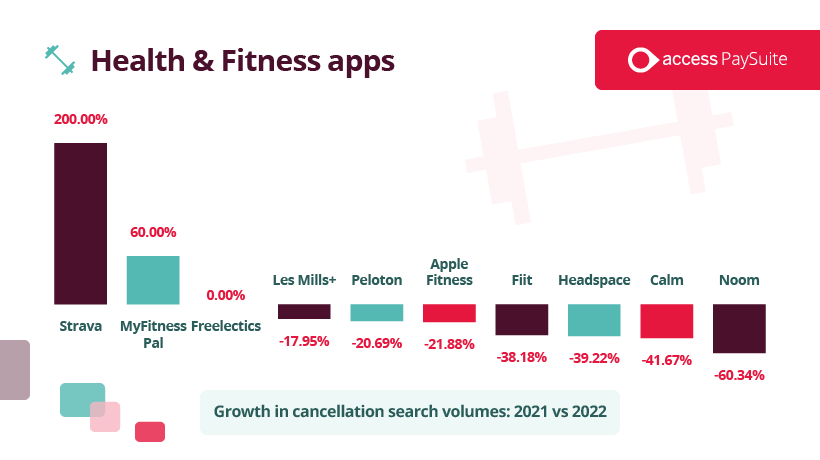 The best subscription apps are continually releasing new features and content, and connecting users to create communities. Fitness and dating apps, in particular, are inherently social and depend on a ‘critical mass’ of people engaging with them to remain relevant.

Subscription models offer a wide range of benefits to other types of businesses too – everything from contact lenses to pet food and plants. This model helps to simplify payments, improve cash flow and scale up with ease, as well as support better customer relationships to drive up retention and up-sell opportunities.

But it’s a mistake to think that consumers are passively locked into subscription services. Our findings suggest many are continually scanning the market, looking for alternatives. They might regularly switch or pause payments in line with their budget and/or changing interests.

Building long-term loyalty depends on the quality of the service, including the ease and security of payments.

With the cost of living a worry at the moment, it’s more important than ever that businesses provide a clear and transparent pricing structure, and lean on their direct debit provider to help them deliver frictionless payment experiences. People want to know exactly how much money will be taken from their account and when, and genuinely attractive offers and incentives that extend beyond the introductory period.

To establish the change in consumer behaviour towards the cancellation of apps with a monthly subscription fee attached to them, we took a sample of 40 apps available via iOS and Android and used Google’s Keyword Planner tool to establish search volume stats for keywords relating to ‘how do I cancel my [app name] subscription app?’.

Other example phrases included in the research included:

Get in touch
This site uses cookies. By continuing to browse the site you are agreeing to our use of cookies.